My friend Isabel (aka Grushenka of Grushenka i Alyosha) came over today, ostensibly to study physics, but really to bake and play some Beatles Rock Band.  She is a pie baker, and I am in love with my new non-stick cupcake tins, so we decided to make miniature pumpkin pies in the cupcake tins, which we intend to bring to our Russian-folk-song-singing club/group/thingy.  And, in honour of the approaching festivities of next weekend (i.e. Halloween), we gave the pies miniature stems and faces so that they looked like jack-o’-lanterns (ok, in retrospect it might’ve been wiser to draw those on with frosting for better accuracy). After a taste test, we agreed that these were absolutely delectable, and would make an excellent dessert for any fall gathering. 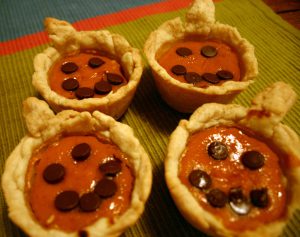 1. Prepare the pie crust: chop the butter into 1/4″ pieces. In a large mixing bowl, cut the butter and flour together until the mixture resembles coarse meal. Adding the ice water 1 table spoon at a time, mix with the flour-butter mixture until the dough holds together. Wrap in plastic wrap and refrigerate.
2. Prepare the filling: in a large mixing bowl, blend together the cream cheese, pumpkin, eggs, sugar, vanilla, cinnamon, nutmeg and ginger and beat until smooth.
3. Preheat the oven to 350oF. Roll out the dough to about 1/16″ thickness. Using a nonstick muffin tin, cut circles large enough to fill each cup. Line the muffin tin with the dough circles. With the extra dough, make the stems, and press into the dough-lined cups to attach. Fill each 3/4 full with filling and decorate with the chocolate chips. Bake 18-20 minutes, until the filling is set and the crust is golden brown. Remove to a wire rack to cool completely, then remove from the cups, taking care not to break the stems in the process.

I don’t really recall eating snickerdoodles growing up, which is a bit shocking as I love cinnamon. Probably the lack of chocolate turned me off to them. In any event, my first recollection of eating a snickerdoodle is over the summer, when I made them for the first time.? Last night, while engaging in my habitual reading-of-food-blogs-to-procrastinate activities, I discovered someone who mentioned making snickerdoodle cookies and snickerdoodle cupcakes and kind of gluing them together with some boiled frosting. What a fantastic idea! Here is my take on that. 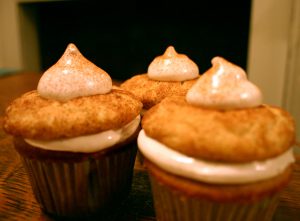 1. Preheat oven to 375oF. Line a baking sheet with parchment paper.
2. In a medium bowl, sift together the flour, cream of tartar, baking soda and salt, and set aside. In a large bowl, cream the butter and sugar on medium for about 2 minutes. Add the egg and beat until combined. Then, add the flour mixture and mix until combined.
3. In a small bowl, stir the remaining 1/4 c of sugar with the cinnamon. Form dough balls about 1″ in diameter and roll in the cinnamon-sugar mixture until well-covered. Place on the baking sheet.
4. Bake for about 10 minutes, or until the cookies begin to crack on top. Remove and let cool on a wire rack.

Makes about 18-20 cookies (but we only need 12, so the extras are excellent for snacking!)

Then, make the cupcakes!

1. Preheat the oven to 350oF. Line a cupcake tray with 12 liners.
2. In a medium bowl, sift together the flour, baking powder, salt and cinnamon. In a large bowl, cream together the butter and sugar. Beat in the eggs, one at a time, mixing well after each addition, followed by the vanilla. Add the flour mixture in 3 parts, alternating with the buttermilk in 2 parts (so you begin and end with the flour mixture. Mix until just combined.
3. Fill the baking cups until about 7/8 full.
4. Bake for about 17-19 minutes. Remove and let cool completely.

1. Combine the sugar, water and corn syrup in a small saucepan. Bring to a boil over medium heat, stirring occasionally until the sugar dissolves. Continue boiling without stirring until the syrup reaches 230oF.
2. Meanwhile, in a large bowl, beat the egg whites using an electric mixer with the whisk attachment on medium-high speed, until soft peaks form. Then, mix in the 1 tbs of sugar.
3. As soon as the sugar reaches 230oF, remove it from the heat. With the mixer on medium-low speed, pour the syrup down the side of the bowl in a slow stream. Raise mixer speed to medium-high and beat until the mixture is completely cool, about 8-10 minutes.

Assembly
Spread a layer of the frosting on top of a cupcake. Press a cookie on top. Garnish with another dollop of frosting, with cinnamon sprinkled on it.

After a very long hiatus, I am back, in a new apartment (yay!) with an old kitchen (boo).

When I was growing up, my mother, like most parents, wanted to make sure that I ate healthily.  In most cases, this meant that I was not allowed to eat white bread.  However, exceptions were made for a bit of heaven sold at the local ShopRite: rainbow bread.  Rainbow bread is simply white bread, made with dyed dough, rolled together and baked normally, but the addition of colour increases its appeal (and apparently its parental approval rating) by tenfold.

Rainbow cupcakes are the cake equivalent of rainbow bread: vanilla cupcakes with rainbow swirls.  They’re no more difficult to make than regular cupcakes but have the added appeal of colour!  In other words, they are absolutely fabulous. 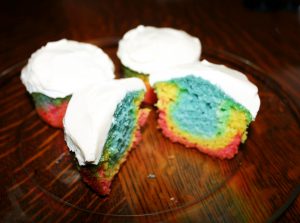 1. Preheat oven to 350oF. Line a 12-cup muffin tin pin.
2. In a medium bowl, whisk together the flour, baking powder and salt. In a large bowl, whisk together the sugar, eggs, vegetable oil, buttermilk and vanilla extract. Pour in the dry ingredients and stir until just combined.
3. Divide batter evenly into 4 small bowls and add 10-12 drops of food colouring to each bowl to make red, yellow, green and blue batters. Stir well, so no streaks of plain batter remain. Add additional food coloring if necessary.
4. Starting with the one of the batter colours, add a small spoonful to each of the muffin cups. Repeat with each of the remaining colours, going in whichever order you like. Do not attempt to spread or stir the colours, but allow them to spread on their own to achieve the layered effect.
5. Bake the cupcakes for about 15-18 minutes, until a toothpick inserted into the centre comes out clean.  Cool on a wire rack before frosting. (I whipped together some cream cheese frosting with 1 8 oz package of cream cheese, 1 c confectioners’ sugar, 1/2 tsp vanilla extract, and 1 tbs milk.)